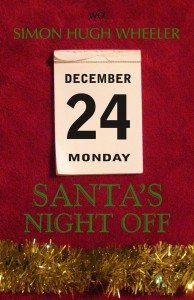 During five days Andalucian author, Simon Hugh Wheeler, is giving away free, three of his e-book titles.Santa’s Night Off. A comedy for all the family, in the form of a movie script, about what would happen if Santa was sick on Christmas Eve. Mrs Claus gets into all sorts of problems including being intercepted by Air Force fighters, pulled over by the cops and abducted by carol-singing aliens.Happy Juice. A play about finding true happiness. A gypsy arrives in a country town, offering an elixir of happiness. But there’s a price: you have to give up what is most important to you. What would you give up?

The Wise One. A fun story for 10-12 year olds about the environment. Only The Wise One can save the planet. But nobody knows who he is, or where to find him. Or her. Many strange characters, including a balding Yeti, a radioactive leek whose brain has suffered a meltdown and a leprechaun with an obsession for potatoes.

Also available is his latest novel, Loosely Translated. A romantic comedy about a frustrated Spanish writer, Maria, who turns to translating, but is only offered a second-rate detective series. So disgusted at the terrible standard of writing and how it can be published when she can’t, she decides to make some changes. Big changes. The difficulties start when the Spanish version becomes a bestseller and the author, Mike, is invited to Madrid for the launch of the second book. And Maria has to translate. A glimpse of life in Spain that goes beyond bullfighting and flamenco. It will also appeal to anyone who has ever dreamed of writing a book.