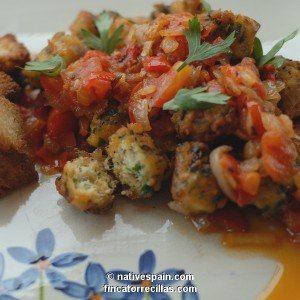 Paco de Lara from Finca Torrecillas Eco Retreat in Murcia, Southern Spain, was excavating one of the out-buildings at his lovely restored Finca when he found a huge pile of hand written notebooks.

Each notebook was covered in meticulous handwriting, with differently-coloured pencils used for headings and titles. Each book had a theme – vegetables, meats, salads, etc. and there were loads of them. Paco realised he’d stumbled upon his grandmother, Maria Luisa’s, stash of recipe books from the 1950s. Maria Luisa had meticulously transcribed her mother’s recipes, who perfected her cooking between 1930-1945. He estimated there were a couple of hundred recipes in this treasure trove. So he set about cataloguing them.

When he’d finished counting, he found he had 2,668 original, hand-written recipes preserved from the civil war period. He got in touch with Debbie Jenkins, an English author and former publisher who had lived near the farmhouse in rural Spain since 2005. Knowing her interest in publishing and cooking he asked her to come over and take a look.

Debbie said, “When Paco called me up to the Finca, I thought I was just going to get some great lunch. Then he showed me his notebooks. Did I think he had something valuable? Was it worth publishing some of these forgotten recipes? Would anyone be interested in trying out these simple, wholesome recipes? Hell, yes! I have to say I was very excited.”

Debbie and Paco decided to test the market with the first book in a series, “Farmhouse Favourites.”

Debbie recalls: “I was the translator, test-cook, editor and designer of the book – oh, and I also got to taste lots of the recipes! I’m so glad this book is finished and these recipes will be preserved.”

Paco was keen to get the book finished so he could show his Grandmother Maria Luisa the fruits of her labours all those years ago. She’s still going strong at 92 years young.

Paco says: “Maria Luisa has been a great inspiration during the process of renovating the farmhouse. We’re now ready to welcome guests and share with them the secrets of Spanish cooking.”

Recipes include the astonishing farmhouse stew, the melt in your mouth fruit ice-cream and surprisingly simple bacon and cheese paella.

Did you know, that to catch and butcher your own turkey you’ll need plenty of rum – for you and the unlucky bird? And that the best way to cook your partridge is in a hole in your garden under a heft of turf?

Whilst there are some surprising recipes the vast majority will be easy to cook where ever you are in the world, with readily available ingredients.

This first book is a great overview of simple farmhouse cooking from a time when there were few processed ingredients, but an abundance of vegetables and freshly butchered meat and poultry. The kitchen at Finca Torrecillas, during the Spanish civil war and postwar period, produced wholesome meals from produce they grew and farmed themselves, and that they obtained on the local black market. The raw materials are mostly fruits and vegetables, poultry, game and livestock and sometimes the fruits from the sea, when they could get them.

These are recipes your grandmother would have cooked, single ingredients blended to create wonderful family food, on a budget. Look out for this book full of healthy Mediterranean recipes that won’t break your budget.

There are over 70 photos to accompany the recipes and a Spanish wine suggestion for each.

NativeSpain.com is a small publishing company specialising in books for people who love Spain. Previous titles include: Going Native in Murcia, Buying Property in Murcia and The Cartagena City Guide. For more information, visit  http://www.NativeSpain.com

Finca Torrecillas is a typical Spanish farmhouse, being lovingly restored by the most recent generation of gentlemen farmers. Paco de Lara discovered the handwritten recipe books during restoration of this ancient farmhouse. For more information, visit http://www.FincaTorrecillas.com