“Eh, hombres, enhorabuenas!” Miguel El Gordo shouted at me and my husband Marcus, over the din of that night’s “entertainment.” 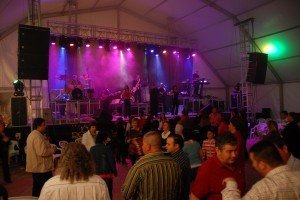 The second night of our fiesta was punctuated with the clamour of a heavy rock band. It was two in the morning and they had only just begun – over three hours later than advertised. But that wasn’t their fault; the electrical generators in the disused quarry just couldn’t cope with the “10,000 watts of sound and 24,000 watts of light!” They had already blown two generators the size of small cars and were now on their third!

The quarry was heaving. The sobrasada and cerveza were flowing. Young children were screaming with glee and racing around the legs of tables, adults and the makeshift beer tents. Even the oldest partygoers were raring to go on all night – dancing, gyrating and generally enjoying the party atmosphere.

“Congratulations for what?” we screamed back in between the chorus and the big guitar solo.

“You’re on the fiesta committee for next year!” Miguel grinned and then he winked, coughed, spat and ambled off to tell his good news to our other friends in the village.

So, we’d been accepted. After 18 months living in this totally Spanish village of 101 people, we were now on the inside of the most important part of village life – the Fiesta Patronale.

Three years earlier we’d decided to leave the hustle and bustle of the city behind and find a better quality of life where the climate and the people were much warmer.

Before we moved we lived in a 3 storey Victorian terraced house in the UK’s second largest city – Birmingham. My husband, Marcus, had a well-paid career with an International consulting company and I ran my publishing business from offices in the city centre. Our family was in striking distance (!), we had plenty of friends and what most would consider a good life. But we yearned for something more.

Though we were active members of our community in Birmingham – we ran the local Neighbourhood Watch and Resident’s Association and were governors of a large secondary school – we never really felt that there was much of a community to belong to begin with.

I suppose what we really wanted was to live somewhere where we felt part of a bigger whole, where people still had time to just stop and chat, where they enjoyed life and made time for each other.

During our travels over the years – and especially our trips to Spain – we found that the level of local community involvement was much higher. The people, as a rule, are more gregarious, they respect the elderly, adore the young and they take enjoying themselves very seriously.

So, we wanted to swap grey concrete, monotony, anonymity, rain, crime and stress for mountains, oceans, trees, variety, a sense of belonging, sunshine, adventure and relaxation. We got La Murta on the Costa Cálida in Southern Spain. Perfect.

Neighbours take on greater importance out in the countryside of Spain too. In England you can live in a street of 400 people in terraced houses, hear their arguments, love-making, eating and fun – and never really know them. Here, in Spain, you are immediately adopted into the Spanish families, welcomed, fed, educated, entertained and good naturedly interrogated about what you’ve been up to. In return you provide them with news, stories and an exotic slice of a different world.

So, have you ever wondered just how these fantastic fiestas get organised? Well we’ve been on the organising committee for 2 fiestas now (this is our year off – to “descansar”) and we’re still wondering! No, seriously, us “jovenes”, anyone between the ages of 20 and 50 run the fiesta every year. The under 20’s are exempt as they are still children and the over 50s have served their fiesta time and are on parole, only to be recalled in emergencies.

We meet every few weeks, to “discuss” (also known as “argue about”) the details and organise the money-making events that take place for the 12 months preceding the fiesta. We run bingo sessions monthly, where we relieve the elderly of their pensions and provide them with entertainment and the chance to win a leg of ham. We plan trips and events to cater for all ages and needs. All of the money goes towards the big fiesta. The more money we make the bigger the fiesta.

Some years our fiesta lasts for 15 days! 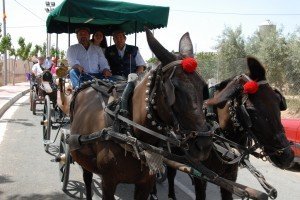 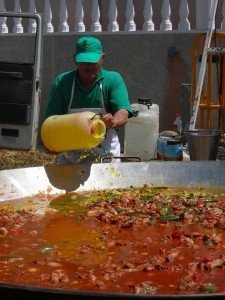 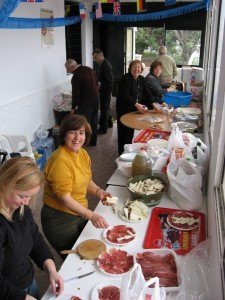 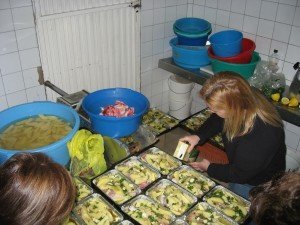 I say on a regular basis that the Spanish “take having fun seriously”. They live a full life here. They spend time with friends and families. They make an effort to enjoy themselves on a regular basis and fill their lives with fun. By being selected for the fiesta commission we’ve effectively been accepted into the most sacred aspect of village life. The fact that we’re foreigners to boot is also testament to the inclusiveness and warmth of our new neighbours and validates our reasons for moving here.

Debbie Jenkins is co-author of “Going Native in Murcia” and author of “Buying Property in Murcia”.
Our fiesta in La Murta is at the end of April – come and enjoy the fun!