Meet Radar – The Newest Addition To Our Cat Colony 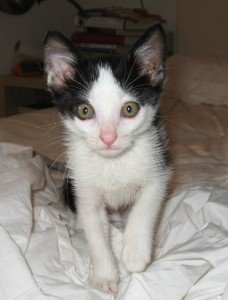 About 10 days ago we had our neighbours up for dinner for Marcus’ birthday, our adoptive mom kept telling me about a new kitten in the village that the baker’s son had rescued for me. “It’s so beautiful, one black eye and one white eye.” She of course used the Murcian word for beautiful – bonico – the usual Spanish word being bonito.

I explained that with the three ferals I already had my work cut out, but as she left she said again, “Qué bonico!” and squeezed my hand.

Buying bread the next day we were accosted by the baker’s mother who urged me to take the kitten, “Bonico!” she yelled into my face, with a pinch to my arm and a half crazed cackle.

I’d obviously been stitched up by the village matriarchs as later that day the other baker, Isabel, also urged me to take the little white kitten with black bits and one black eye and one white. (Note, we have three bakeries in our village of 101 people, we like our bread here in La Murta!)

So, we went to see him and as soon as the baker’s son popped the little fella into my arms he was ours. He was very tiny, perhaps 4 weeks old and very bonico. Here are his first baby photos. 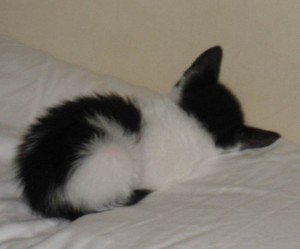 White with black splotches - sleeping on my pillow 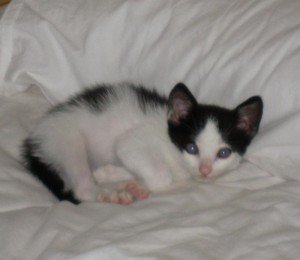 Rolled over for a photo - nice black eyeliner 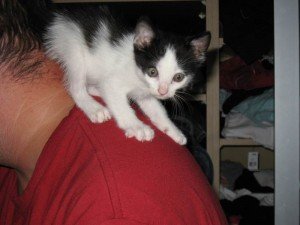 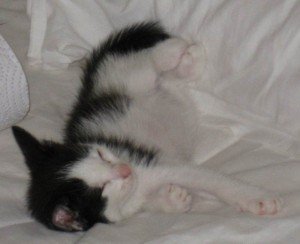 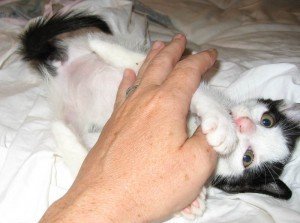 One white ball and one black!

Now, one thing all the ladies in the village hadn’t noticed is that not only does he have one white eye and one black, but the little fella has one white ball and one black!Or maybe they were too polite to mention it (more polite than me!)

An update on the ferals

They’re doing gloriously well, putting on weight, growing and gaining confidence. The two boys (Hawkeye and BJ) love having a cuddle and are happy playing with Radar. The little girl (Hotlips) is still nervous though, and prefers her own company most of the time, though she has put on weight, is slightly taller than the boys and confidently roams the house (and then hides in the kitchen all day behind the kickboard). The original cats (Randy & Catalina) are still a little wary of all these new intruders, though Catalina likes eating with the new cats. Randy prefers making exorcist type noises much to the amusement of the babies!

I tried to get a photo of all three of the ferals, but Hotlips wasn’t feeling photogenic, so here are the boys! 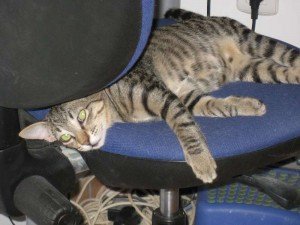 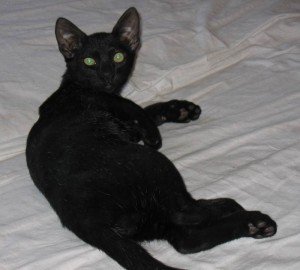 And the Big Cats

I couldn’t resist including a couple of photos of the big cats. They love bird watching together and Catalina likes relaxing on the loo. 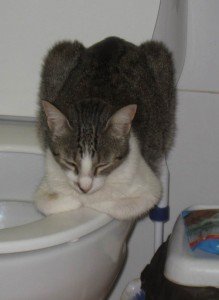 Catalina chilling on the loo 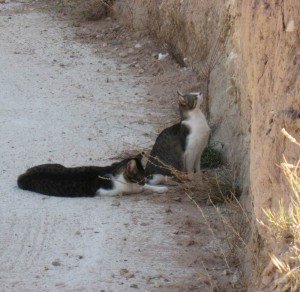 Randy birdwatching at sunset - they sit for hours!

So that makes six cats, more than enough. We’ll be off to the vets soon enough for a neutering session, I wonder if we’ll get a discount for a group booking!